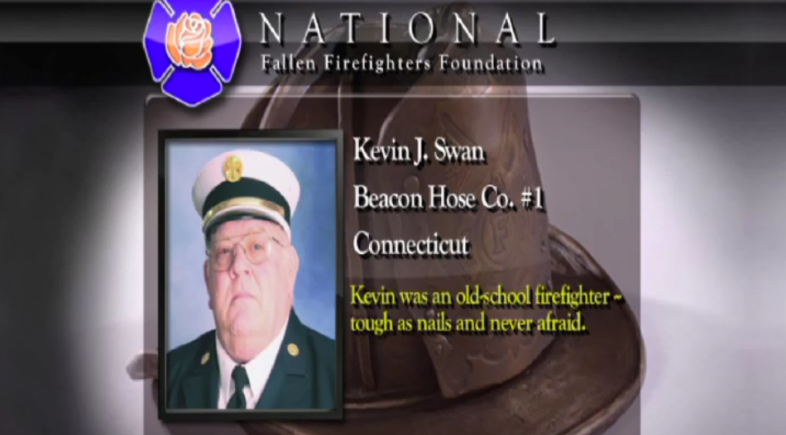 We remember Past Asst. Chief Kevin Swan, whom we lost in a line-of-duty death five years ago.

Kevin died March 10, 2010, after suffering a heart attack while responding to a call. He was the captain of the Beacon Hose Fire Police at the time. He was a member of our department for nearly 50 years, during which time he served as assistant chief and an active member of our area’s two major chiefs’ associations.

Beacon Hose bestowed full honors upon Kevin’s passing, including a funeral procession down Main Street led by our 1929 Seagrave.

Among those who remembered Kevin in various news articles at the time included longtime department volunteers Jeremy Rodorigo and Doug Bousquet.

Rodorigo: “Kevin cared very deeply about the fire service. When you joined the fire department, you didn’t just become a firefighter — you became part of the family‚ and he wanted you to know all about the tradition. He wanted you to know that you were never alone from this point forward. Part of his generosity was‚ once you were taken into the department‚ he treated you like family.”

More from Rodorigo: “I remember people saying, ‘If you want to learn how to drive fire apparatus and learn to pump these things like an expert‚ you really need to talk to Swan. He knows this equipment inside and out.’ He was an old-school firefighter. Tough as nails‚ never afraid, and one inclined first to grab a hose. While we were busy checking and making sure our air packs and hoods were on just right‚ Kevin was already ten paces in front of us with a hose‚ getting at the fire.”

Bousquet: “There are really no words for Kevin. I got to know him when I first joined the department‚ and I was a little intimidated by him‚ but in a good way. I learned a lot from him. He was a good leader and a good teacher. To me‚ he was like a father figure.”

For those who would like to read more about Kevin Swan, please visit the following links:

We’d also like to thank Beacon Hose firefighter/EMT Kevin O’Connell for shoveling out our letterboard sign so we could honor Kevin Swan’s memory outside the firehouse.