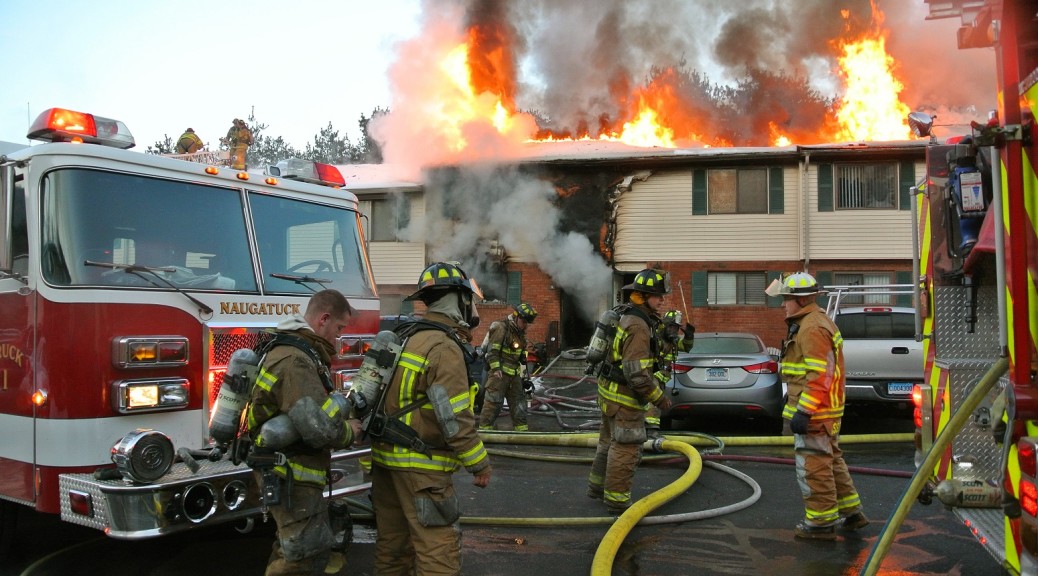 It’s been a busy couple of weeks for our brothers at the Naugatuck Fire Department, and Beacon Hose has been called to provide mutual aid at four fires during that time.

The biggest and most recent response came Feb. 13 at the Meadowland Estates condominiums on Horton Hill Road for a working structure fire.

The fire started at around 6 a.m. in the basement of a middle unit and spread to the first floor, second floor and attic. Engine 3 was dispatched at 6:28 a.m.

Upon Beacon Hose’s arrival to the scene, Naugatuck was encountering heavy fire in a middle condo unit and had one line in operation. Beacon Hose was second due and laid a feeder line from another hydrant to start work on the C-side of the complex.

The five initial Beacon Hose members on scene stretched a line and laddered the building to start roof ventilation. Under the direction of Capt. Howie Leeper and 2nd Lt. John Weid, firefighters forced the doors to two apartments and pulled ceiling in an effort to extinguish the fire.

Waterbury operated in adjacent apartments as Naugatuck maintained control of the original apartment. The fire extended far beyond the original condo, so crews were backed out and defensive measures were put in place. After the fire was under control with a ladder tower, crews were sent back in to extinguish the fire.

All residents safely escaped the building, but four condos were destroyed and several others were damaged. A total of 16 residents were displaced. Beacon Hose EMS was the initial unit on scene and transported two victims.

As members operated on scene, members back at Beacon Hose headquarters made sandwiches and coffee to be brought to the scene for all firefighters. The frigid weather required crew rotations, and 1st Lt. John Mis led Rescue 4 to the scene later to finish overhaul. Beacon Hose’s operations were complete by about 9 a.m.

A total of 15 Beacon Hose members, between fire and EMS, were on scene. Middlebury and Prospect joined Naugatuck, Beacon Hose and Waterbury.

Chief Jim Trzaski wants to express his pride in representing a highly respected, dedicated and skilled fire department. Beacon Hose members on scene were impressive and focused. It became clear that each one of our members has great value to our department.

There is some more information in this Republican-American story.

On Feb. 6, Beacon Hose provided mutual-aid RIT and overhaul to two scenes on the same day. The first was a house fire on Melbourne Court, and the second was a mattress fire in an apartment on Highland Avenue.

On Feb. 2, Beacon Hose provided mutual-aid RIT and overhaul to a house fire on Route 63. Several passers-by helped to pull a senior citizen out of the home before we arrived. The fire appeared to start in the kitchen with a grease fire.